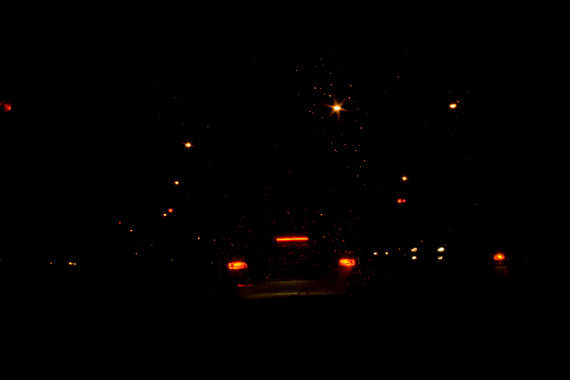 The road feels waxy after the rain. The thunderstorm is gone. The clouds look like coloured smoke, with that kind of odd light you get from a black mirror. The roads are practically empty, abandoned cars and vehicles line the side of the parkway. A dark blue police car lies in wait in an emergency stopping bay, watching the oncoming traffic. It’s headlights are like the eyes of a panther, glowing in the dark as I pass by. Even at this time at night the tower lights are still changing colour. Normally they turn it off around about now.

In a month I will have a new job. The wheels of progress finally turned for me and I have managed to avoid the sharp blade of Madam Guillotine. At least for now. But others haven’t been so lucky. Some of my friends and comrades found it was their last day today. My boss (at least the one I liked) moved to a different job two weeks ago. Others have disappeared or assumed some kind of noble self-exile.

I’m looking forward to a break, in between what will soon be my old job – which has become something between mind-numbing drudgery and a confusing haze of what-the-fuck-am-I-doing-now – to something that will be at least more involved and meaningful. At least it has to be entertaining. I’m tired of working for a person (the boss I do not like) who has a mad love affair with micromanagement. He also has the personality of a petulant child, making demands while only giving me half of the information. And all of this is normally delivered through a series of subordinates that seem to rotate on a regular basis. Napoleon complex comes to mind.

With the Help Desk moving to another city, it was only a matter of time before everything came to an end, and now it is here. It feels weird. All of those cool little moments are gone. By the time I return to work after the weekend the floor will be practically empty. It’s damn depressing. My only hope that my greener pastures isn’t next door to an abattoir…

Welcome to the Vampire Hours.