To get to Fukuoka, I rode the Shinkansen, which is the best example of mass transport I have seen so far. Not just because it’s a train that maglev capabilities and that it does a normal speed of about three hundred and twenty kilometres per hour. But because the thing is dead quiet and the service is all about enjoying the ride. That’s right, the Shinkansen people believe that their ride is a work of art and should be enjoyed as such. They ask people to turn their phones to silent and there’s even a car where passengers can sit and enjoy an announcement-free ride, so you can watch the countryside race by in a blur. And this is a service that has been running since the sixties.

When my ride comes to an end at Hakata station, I find my hotel just around the corner. The Toyoko-inn is a chain of budget business hotels designed for business folks or people that want to save a bit of scratch. And it’s a pretty decent hotel by all accounts. I basically spend the evening drinking some beer and catching up on some rest after the last few days of Osaka.

The next day I was due to get to the Kokusai Centre where they were holding the matches, sadly I found out that I was too late the tickets had been sold out for a day. I could have stayed on another day, but really did not want to interrupt my schedule for Tokyo or Hiroshima. So instead I decided to take a blind walk through the city. Well I knew where a couple of shops were, in relation to one of the subway stations. It was a Sunday, and the one day passes were not available, so I hoofed it further and further into the city.

Eventually, I the Mandarake store and decided to have a poke around. I found a couple of gifts for some friends and then made it back to the hotel to sort out what I needed to post and what I could keep with me. I had dinner at this izakaya in the nearby underground mall and the girl there had really good english. Honestly it surprised me. I should have gotten her name.

Here are some pictures taken from the Shinkansen. The weather wasn’t great. 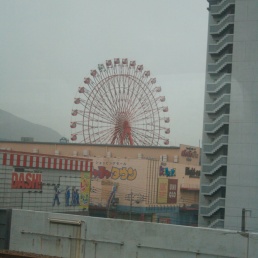