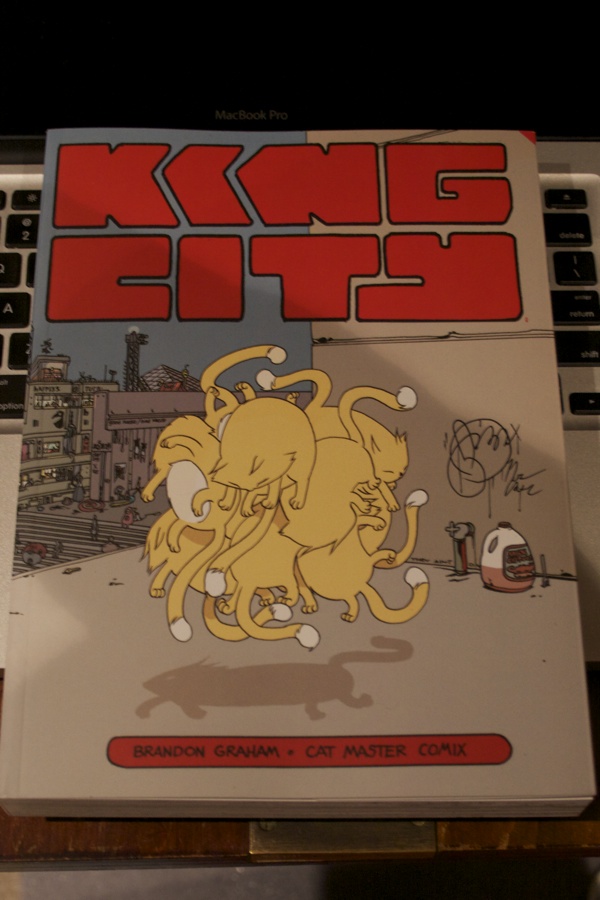 I was prompted to read King City after seeing via JWZ. I never read a Brandon Graham comic before and this one, a massive black-and-white volume, left me flabbergasted. The art is western-manga styled, and feels and reads like an underground style comic. Something that sells out at a high-end ‘zine fair. The eponymous city is in the same vein of Transmetropolitan, a seemingly never-end sprawl, a place of gangs and spies, and where ninja and kung-fu adherents rain from the sky. The story is threefold. First, there’s Joe and his cat, Earthling. Joe is a Cat Master, meaning that depending on the ‘cat drugs’ he injects into Earthling, allows the cat to perform a multitude of tasks, from picking locks to performing surgery to being a killer boomerang buzzsaw. The second story is about Anna Greengables and her boyfriend, Max. Max is a veteran from the xombie wars in Korea, and one of the few left from his former platoon. He’s also an addict to a drug called Chalk, which slowly calcifies you. Anna Greengables is Joe’s former girlfriend, and someone whom Joe is still hung up about. Lastly, there’s Pete, Joe’s friend, who gets caught up in delivering a water-breathing alien to an exotic sex club and decides to later rescue her. Meanwhile, there’s the Lovecraftian Demon King set to land in the City and destroy/devour everything in its path.

The art is clean and crisp. And there’s an innumerable little things going for it. The panels with arrowed captions, describing equipment and places and people. The puns and quips. The nod to Manara. And much, much more with 424 pages of story to read through. There is good balance between the major plot lines and an ending I didn’t expect. Probably the strangest comic I’ve read this year and the next best indie (because Infinite Kung Fu kinda got there first)