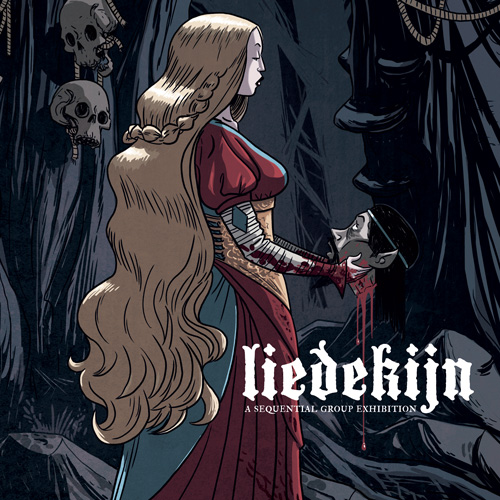 A year after co-editing and launching the sold-out Beginnings comics anthology, Emma-Jean will be opening Liedekijn, a sequential exhibition showcasing the fascinating work of twenty-four artists as they each tell a part of the medieval Dutch folk tale Heer Halewijn. Emma took some time out to talk about the upcoming show.
J: So Emma, give us an intro about yourself.

EJ: I’m a garden-variety nerd and art-school drop-out. I’ve been making comics for, let’s say, for more than a decade, one being Deep and Meaningless (http://deepmeaningless.com). It’s currently on hiatus while working on the exhibition.

J: Liedekijn is based on a Dutch folk tale called Heer Halewijn, can you tell us more about that?

EJ: Liedekijn gets its title from the first line of the folk tale, which is:

It basically translates as:

So the project really is called “Little Song”.

The story is standard fare for folk tales where a psychopath that lures women into a forest and murders them. However, he meets his match with a princess that turns the tables on him.
Liedekijn will be told through a sequence of paintings, each created by a different artist. The end result being that when you walk by the paintings as it tells the entire story.

J: What was it about this story that made it this project and exhibition? What was the appeal? Were there other stories/fables/folk tales you had in mind?

EJ: It started out that I wanted to run another collaborative project like Beginnings, where a story is told through artwork with different artists. We went with a folk tale, because unlike an original story, there will be plenty of references and resources for the artist to draw upon. We all have grown up with folk tales all our lives. There’s a bad guy and he’s either going to get away with it and there’s moral, or he’s going to meet his match.

Another similar tale was Bluebeard, because it’s among my favourites. It’s similar to Heer Halewijn in a lot of ways, except that the princess is rescued by her brothers that conveniently pass-by. It’s a real deus ex machina. I liked Heer Halewijn as the heroine knows how to defeat the villian herself and her family are proud of that.

J: So how many artists have been involved in the project? (who are they, etc.)

Some of the people involved, I have been following in the indie comic world for fifteen years. Tim McEwen is among them, he created Greener Pastures and Douglas Holgate, he’s doing the cover, and I have some of his art on my wall at home. And there’s people who I don’t know from a bar of soap, from Canberra, Toronto, Virginia and… Adelaide.

J: What kind of work have they produced? What should we expect when everything’s on the wall?

EJ: There’s a broad range of style at play with this exhibition. A lot of the contributing artists are making this an opportunity to expand their repertoire. So the work that’s on their folio and websites is not necessarily going to be the same kind of work in the gallery.
One example is Alice Farquharson. She was one of the contributors to Beginnings and made something that looked like digital woodcuts. The piece for Liedekijn is almost the opposite. You would not think it was done by the same person; it’s a lot of pen and pencil and gold ink.

J: The previous project you helped edit was the Beginnings Anthology last year. Is this a spiritual follow on from that?

EJ: In a sense, yes, it is. In collaboration, we can achieve more than we can on our own. With our comics anthology, Beginnings, it cost a bunch to put together. But we broke even, which is what we hoped for. If you’re starting out, you probably won’t have the capital or the reputation to cover the printing costs. Anthologies are a great way of getting your work in print and sampling what is in comics today. There are usually one or two people that you know and there’s others that you will fall in love with. So I hope that this happens with this exhibition.

The exhibition will have an art book as a catalogue of the works involved. It will include the story and it’s all set to this Fourteenth Century-style design. It’s going to look great once it comes back from the printers in February.

All of the artwork is for sale. With Beginnings, we were not able to pay people, which, while it’s more or less accepted in indie comics, it kind of bugs me. I don’t like asking people to do something for nothing.
But when it comes to exhibitions we have to be a little more financially aware, there are costs involved, so the original work will be available for sale. There will also be a limited number of prints available of most of pieces in case someone cannot afford or misses out on purchasing the original.

J: What do you have planned once Liedekijn is taken off the walls?