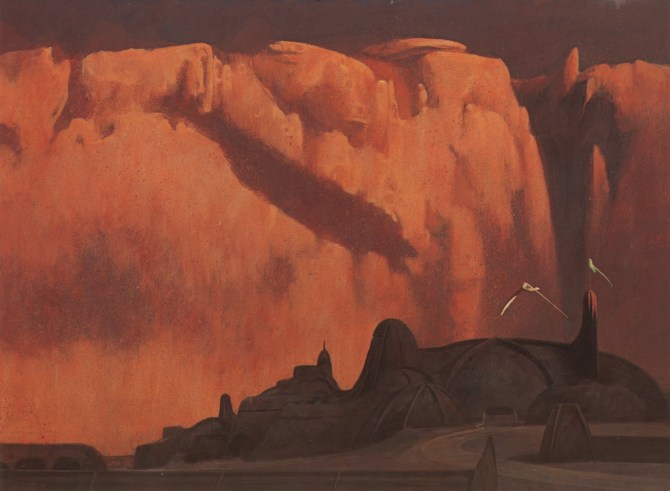 Recently I finished reading Dune by Frank Herbert for the first time in what must be a decade. It’s one of the best science fiction novels out there, and one of the best novels I’ve read ever. It is a sprawling space opera, tied in with themes of intrigue, vendetta, religion, eugenics, evolution and ecology. It is a novel that sits between Hamlet and Lawrence of Arabia.

Dune is the kind of novel that broke a lot of moulds. It’s one of the few to abandon computers and robots, which are a staple throughout most science-fiction stories. It incorporated strong thoughts about the economics, politics and intrigues of a feudal empire that spanned the stars and was tied together by a single resource, the spice Melange. There was also a highly detailed ecology and how this environment shaped the people and creatures that on its sand.

It is also about prophecy. The main characters go to exploit such a prophecy, as it will provide them safe passage among an alien culture, but soon they are trapped by it, forced to play out the role of messiahs. Likewise, to see the future is to be similarly ensnared by it, since knowing what happens next, any attempt to alter events may allow for the intended future to take place.

Dune has had a couple of adaptations. The David Lynch version goes off the rails (though I liked most of the costumes), while the Sci-Fi (now Syfy) Channel’s miniseries was closer to the book, and had some charm, it’s a pity it didn’t have the budget to carry it to a higher level. The next miniseries, looked even cheaper and the only scene I really enjoyed was about Stilgar. There was a recent attempt to make another film, but this fell through (the cynical conclusion is that they either couldn’t take out the Arabic references, or couldn’t turn it into a sexy-action thriller). The video games were kind of fun too, and if you find the one published by Cryo, you probably won’t play a game quite like it anywhere else.

Frank Herbert continued to write about the characters, with the first two, Dune Messiah and Children of Dune, to conclude the space opera storyline that was sown in the first book. But after that the series became inaccessible to most audiences, working towards that kind of deep-thinking science-fiction, which may as well be written in an alien language to today’s audiences. And after that, his son, Brian Herbert, and Kevin J Anderson hacked together the final two books which basically undo all of the work made by Herbert at the start.

Naturally, I just wanted to write some thoughts about it, rather than explain the novel’s plot at length. Besides there is a wikipedia article for that, but I highly recommend reading the novel itself.

Image and thumbnail by John Schoenherr, found at Ski-Ffy