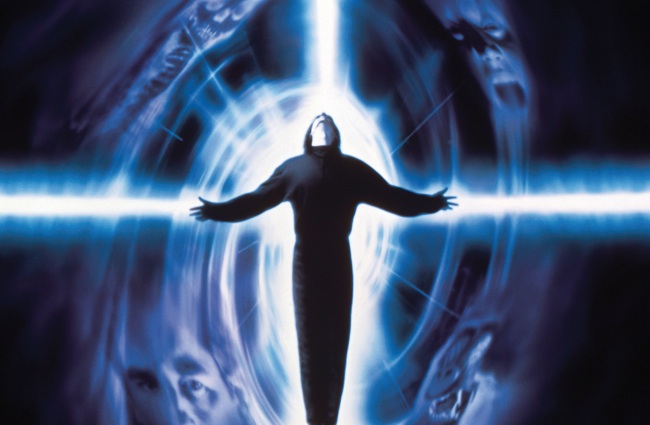 Honestly, I prefer Lord of Illusions over Constantine. Mostly because Constantine feels like the source material was taken, cut to pieces and then reassembled by the writers while being whipped by studio execs. That’s not to say that Constantine is bad, it’s just so deviated from the Jamie Delano/Garth Ennis writing, it’s just not John Constantine: Hellblazer. At least you know that Clive Barker is consistent. And realistically, Constantine is everything that Lord of Illusions should have been.
Harry D’Amour is an occult private detective, who is still haunted by a recent case involving an exorcism. He is given a job to tail a guy involving insurance fraud, only to be wrapped up in a battle between enigmatic (and currently “dead”) magician Nix (and his followers) and illusionist Swann. The opening scene between Swann and his allies, and Nix and his Manson-like family is brilliant, and was one of the few things that really stuck with me, even after years.
Nix is your usual cult leader, armed with the promise of an apocalyptic nirvana and a handful of parlour tricks. He has kidnapped a girl, in the hopes of luring Swann back into the fold. Swann is Nix’s most promising student, yet wants nothing to do with Nix’s plans to set the world on fire. After a short battle, Nix is mortally wounded and bound by Swann, his spirit trapped in his own body. One of Nix’s disciples, Butterfield, escapes vowing revenge.
Years pass and Butterfield has tracked down Swann’s accomplices, one of which, is visited by Harry D’Amour in the middle of being killed by Butterfield. And what follows is the noir filling of this film. Harry confront’s the fortune teller’s friend, Swann, who is now a world-class illusionist, wife Dorothea, and Valentin, Swann’s hyper-loyal personal assistant. As Harry digs deeper, he finds Swann’s past on binding Nix and learns that his cult is still out in the wind, waiting for him to be dug up. And thanks to an interesting scene or two, that’s exactly what happens.
The third act of this film fascinates me. As the true intentions of one character comes to bare. Butterfield digs up Nix. He is the most faithful disciple. Over the years, while planning revenge on Swann & Co, Butterfield taught himself how to unbind Nix, forging the very tools for the job. All he wants is to receive benediction from Nix, to live at his right hand. But that is place reserved for someone else. Swann was the only one to challenge Nix, and was damn successful at it. And who better, according to Nix’s twisted gospel should be at his side while the world burns down, than Swann. Basically, Nix is some kind of messiah who is actually forgiving Swann for betraying him in the first place. He bats Butterfield away like a fly and addresses his congregation. Now the members of the cult have flown back to their desert-blown nest, after living seemingly-normal lives, hoping to return to Nix’s bosom. They madly cut their hair, break bottles on the ground and then drop to kneel on the broken shards. Nix then claims that the ground had to give him up, so he has to return something of equal value. And then each cult member is sucked into the clay like it was quicksand. As they perish, Nix points out that while he was in the ground, they did nothing but hide. Nix then continues to pursue Swann, D’Amour and Dorothea. Swann attempts a ruse of joining Nix’s side, but is mortally wounded when Nix sees through it. And in the end, as Nix is transforming into a Lovecraftian-style creature similar to the thing that Convex was mutating into at the end of Videodrome) he is tossed down into a hole into some lava. A very material hell for a metaphysical kind of guy.
Lord of Illusion, in spite of its budget and age (oh ’90s special effects) the film still has charm. It wants to harness the volatile spirit of the post-modern occult mythology and bind it in a jar of classical Hammett-Chandler noir style. And while it doesn’t completely put you under its spell, it has better suspension of disbelief than other movies which tried to crowbar in any supernatural elements.