It’s that time of year again. Art, Not Apart cranked up again to be taller and more widespread. Instead of the odd graffiti-slash-street artist given a place to spray, there was an entire artists’ alley and other pockets around the New Acton campus. Instead of being contained within the main area, the event even filled out the Acton Nishi building. Having speed out a bit allowed some space for more interesting things. The Street Arts Alley was made up of scaffolding and pltboard to give everyone a canvas to spray on and a spot to sell zines sketches, t-shirts and so on. You could make your own terrarium (someone I only learned about after the fact…) or mill around the suitcase rummage.

So I managed to meet Behe-moth, pick up the Ripple Tank zine, and catch up with the folks of the Canberra Zine Emporium, along with making a few other art purchases.

Sadly my wanderings were cut short when I was hit by debris.

I was trying to talk to one of the graf artists who had set up works on the Acton Nishi building. They were working on large panels made of cardboard, held together by frames of wood It was a pretty windy day, and as I was about to drum up a conversation with one of them, when one of the canvases struck me from behind. It hit me with such force that I fell to my knees, and my glasses were knocked from my head and went skittering across the pavement. I heard glass smash. I thought it was my specs, but it turned out to be the cola I was carrying around. I didn’t realise it had been knocked from my hand.

The artist was shaken and then dove right in tearing down each of the panels, in the event another one rend itself free in the gale. I talked to a security guard who ran a quick check to see if I was concussed. And all I really had was a mild bump and a headache. The manager came around offering anything he could do to remedy the situation. All I was really after was a replacement coke. He also offered tickets to see Six Women Against White Wall. It was a performance piece where six women (only managed to photograph five) stood on a low stage and were animated in strange, slightly manic ways. And the audience was quietly invited to participate in walking up to the stage and interacting with them.

The rest of my afternoon was spent sitting helping at the Canberra Zine Emporium table. Which was probably for the best since it was quiet and indoors, but active enough to ensure I stayed occupied.

In the end, it rained and called an end to most of the proceedings. I cycled home after the first shower and now that its raining again all I want to do it sleep. 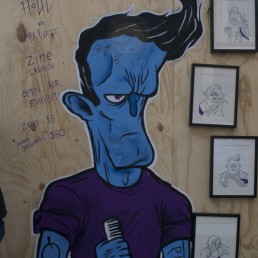 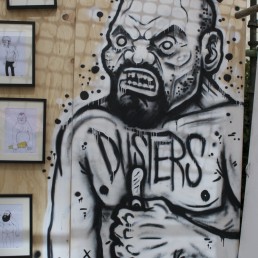