Let me get straight to the meat of this review. The main problem with Valerian and the City of a Thousand Planets, is that there is far too little of the City of a Thousand Planets. In fact, it should have been called Valerian and Laureline. Because that’s what the film really focused on. In most pop culture, the title is a handful of words that sums up the idea of the film. Star Wars is about battles in space, Star Trek is about exploring in space. Stargate is about a gate to other planets. The City of a Thousand Planets is barely a backdrop in the film. The most you every see of the city are tunnels. The main characters barely interact with it. There’s no great interaction with the denizens, unless the plot demanded it. In fact, for all the pretence that the city is meant to be inhabited by literally a thousand planets worth of races, you barely see or understand them, except for exposition dumps.

The film starts to the sound of David Bowie’s Space Oddity, where humans are building a space station by joining the modules originating from different nations. This montage details over several centuries eventually culminating to the humans welcoming alien races with a handshake. Now, before I continue, here’s an interesting thing: each of the aliens in this montage is played by a different actor. I can’t tell if its suits, or motion-capture or both. And the aliens look interesting. It’s a pity this entire scene really amounts to nothing. It’s just to introduce the origin of a city, which once again, none of the characters explore, they just run through tunnels.

And this is one of three introductions to the film. The second is to some idyllic, James Cameron’s Avatar-by-the-sea scene, where aliens known as Pearls, spend their days harvesting literal pearls and feeding them to creatures that can impossibly replicate a multitude of one pearl. Of course, a cataclysm befalls them as alien ships breach their atmosphere and destroy their planet. With most of the aliens trapped inside one of the downed vessels, one of the dying aliens sends out a blue flash.

This takes us to our third introduction where Valerian wakes up on a small sand bar to a blue flash. Laureline enters and is quickly sexually harassed by Valerian. And its pretty much at this point my prediction comes true: 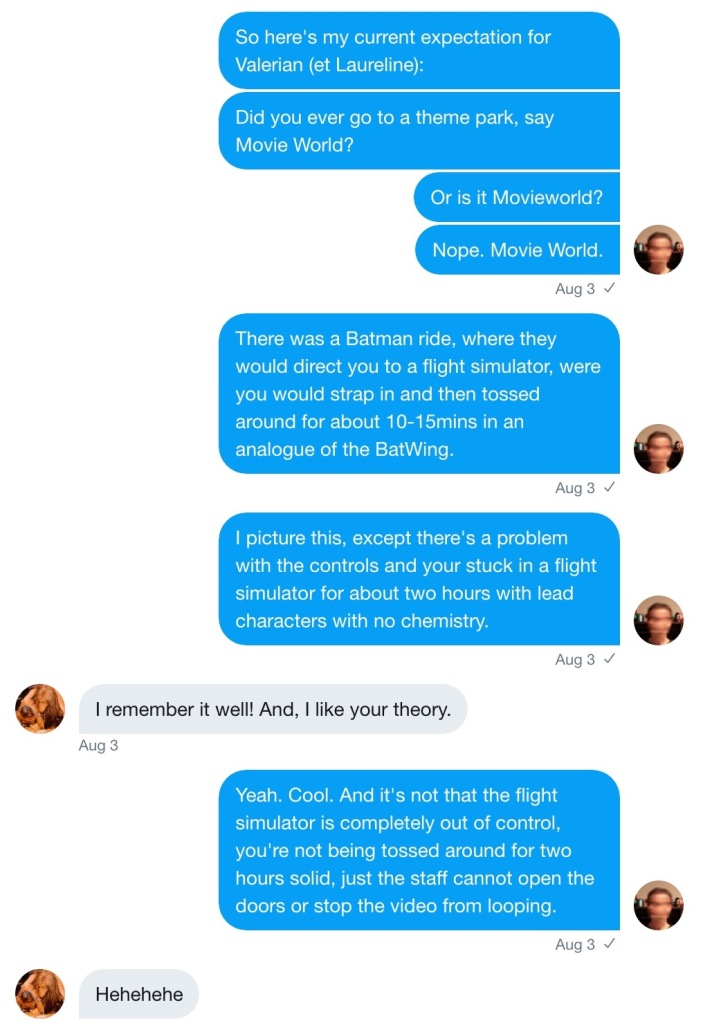 I hate when I am right. The dialogue and interaction between Dane DeHaan and Cara Delevingne comes across as antagonistic to the point it makes me question why these people are even working together. Valerian likes women, he wants to bang Laureline, and intrudes on her space. Then Laureline’s dialogue seems so backwards simply stating she doesn’t want to be “one of his conquests”, instead of something more contemporary. This is all before their joint mission to recover something called the “converter”. They go to a market place which really sits in another dimension for no other reason than to look neat. The other dimension-ness of this scene is entirely pointless and has no real effect, as any other kind of chase-slash-action sequence would play out all the same.

They take the convertor (which is one of the replicating creatures from the second introduction) to Alpha, The City of a Thousand Planets (which we remember seeing from the first introduction), and then were prepare ourselves for another introduction or at the very least, the worst exposition dump I have ever heard. And all the aliens you see in this introduction, you see again from that scene in the trailer where Valerian is running through different sections of the city. And those two alien sections, one underwater and the other also sort of underwater, the exposition dump said they were on the other sides of the city, even though Valerian beelines straight through both of them.

I’m getting a little off track once again. There’s just so many problems.

Valerian and Laureline are meant to hand over the creature to Clive Owen’s character for reasons that aren’t clear, at first, but everything is explained in an exposition dump about fifteen minutes from the end to explain introduction number two. For most of the rest of the film, we have Valerian (I really hate typing that name) and Laureline running around Alpha on achieving their mission of recovering Clive Owen from the Pearls. But they the director’s ego blocks their attempts, by throwing different scenes in their way. Valerian has to be rescued by Laureline, then Laureline has to be rescued by Valerian. It’s all filler really. And it is a real pity too. Rihanna, plays a shapeshifting creature which would have been a nice touch if that was a major focus of the film. But it is another distraction. Just a Rihanna’s character of Bubbles really comes into strike, she is killed off. And then Valerian goes back trying to woo Laureline.

Eventually, all of the film macguffins converge so we can have exposition dump number – I don’t know – six? Yeah. Fuck it, exposition number six, where the Pearls tell of their miraculous survival after their planet was destroyed and the remainder of their species survived on that derelict ship that crashed. Through the powers of script-writing alone, the creatures survived, and eventually made it to Alpha, the City which we don’t see. What’s more miraculous than their survival, their ability to forgive those that destroyed their planet. Apparently, despite being noble savages that live in harmony with their (now former) planet, they also are weirdly adept at picking their way through complex engineering and technical problems that would have centuries for other species. I’m calling a deus ex scriptor on this one. Whatever. This film bored me so much. I fairly sure my friend Mark was immensely bored. Each time I glanced across to him, he was leaning all the way to the right in his chair. Like a part of him wanted to escape the cinema, just from John Carpenter’s The Thing, where the head breaks away, grows legs and skitters out of the room. Meanwhile, I’m making noises, the kind you do when you’re alone in an elevator, waiting to hit reach a floor – that kind of “bap-bap-bap” staccato. I started doing when whenever the two main characters talked.

The action scenes weren’t really new. They lack any tension since all of the antagonists were deflated one way or another. I kind of ignored the ending, since I really just wanted to leave the cinema.

The visuals would have been better if there was a story to go with it. The designs of the aliens were neat, but we don’t really see them. And these aliens had names for their species, they’re all mentioned in the IMDB page. But we don’t hear from them, or see the vast different races get along (or not) in a city we don’t even see beyond its tunnels and red light districts.

I don’t know what’s worse, Lucy or this. I’d still say Lucy, because it’s still a very terrible attempt at some kind of philosophical film which takes its cues from the Fricke and Reggio trilogies, 2001: A Space Odyssey and Akira. Valerian takes all of its cues from a long-running comic book series. I’m going to guess that Besson lifted random scenes and scenery from the comics and then attempted to amalgamate them into this film.

Just watch this one at home. Where you can pause it, leave your seat and look outside, or go do some shopping, or skip ahead to the next piece of exposition.